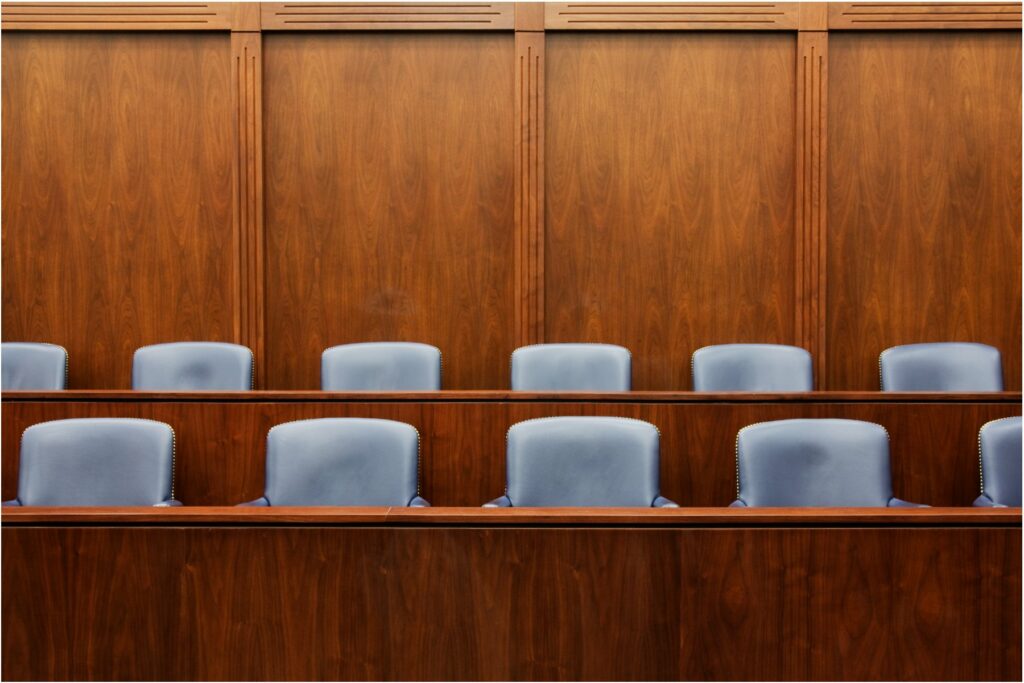 We recently defended an employer against a claim of failure to reasonably accommodate an employee’s religious beliefs in a week-long federal jury trial.

Our client (a large employer) required annual training, which included training on nondiscrimination against employees who are transgender. The plaintiff (employee) objected to answering certain questions in the training, stating that doing so would have required him to endorse beliefs with which he did not agree based upon his religion. Our client said, “no, it won’t – we aren’t asking you to change your beliefs but complete the training.”  The plaintiff said, “yes, it will” – and the back and forth continued until a federal lawsuit ensued that lasted nearly four years.

The jury was very diverse in terms of gender, race, education level, and even nationality. They were also very attentive, and seemed focused on the evidence and witnesses throughout the trial.

After a week-long trial, the jury delivered a favorable verdict for our side. The jury agreed with our client’s initial position, that it was not asking the plaintiff to change his religious beliefs and hence, there was no conflict between the training and his asserted beliefs and therefore no discrimination.

This case in particular was very compelling – okay, not quite as compelling as Johnny Depp v. Amber Heard, but compelling, nonetheless. It featured not only current issues of non-discrimination and equal treatment for transgender employees, but also explored where the boundary line falls between an employee’s religious beliefs and the employer’s workplace policies and requirements under Title VII, which often is not very clear.

Below are three key things that the jury saw and heard in our trial, and three lessons that I learned in this case that I want to share.

The jury saw, heard, and was persuaded by our witnesses.

As trial lawyers, I think we sometimes think far too much about ourselves, having an inflated sense of our own importance to the jury. My role as trial counsel is akin to the director of a play – I try to present our witnesses, evidence, and arguments in the best possible way, but then also get “out of the way” to help the jury focus on what is most important. As a trial lawyer, what is most important in the courtroom is not me – it is the witnesses (and other evidence) in the case.

In our case, we were able to present witnesses who were very sincere, pleasant in their demeanor, and open about what they did and why they did it. Our key Human Resources Manager, an experienced former employee of our client who voluntarily traveled across the country in order to testify, began by explaining why she loved working in HR for 25+ years: to help employees. She said it and it was clear that she meant it. She was mild mannered, sincere, and her good faith came shining through on the stand. Other witnesses had different personalities and experience sets, and in each case we tailored our examinations with those in mind. The goal for each witness was to help them tell the truth of what happened in the most effective and relatable way possible within the context of their personalities and abilities.

Before you can do this, you must know your witnesses, and knowing a person takes time. It took multiple hours and meetings with each witness to build their trust and comfort. This was critical if the jury was going to clearly see and hear the truth from them, and it paid off.

Lesson 1: Take the time you need to prepare your witnesses to display their strengths to the jury.

Put in the time needed to get your witnesses ready to testify effectively. Your witnesses may feel challenged and may struggle to understand the importance of their demeanor in explaining what they did and why they did it. But their understanding will lead to comfort and confidence, and the jury will notice.

Said another way, as you head into trial, you want to be in a position where you will never have to second guess the amount of time spent meeting with and preparing your key witnesses. It is that important to enabling the jury to clearly see, hear, and understand your witnesses and evidence, and ultimately, to winning your case.

The jury watched the plaintiff damage his own case during his second cross examination.

At our trial, I was able to cross-examine the plaintiff once during his case. We obtained some favorable admissions, but his demeanor – which we thought the jury would see as unreasonably harsh and uncompromising – did not come out as much as we had seen earlier in the case.

But the next day . . . well, we got a second chance. After we rested our case, the plaintiff chose to take the stand again to try and rebut key testimony from his former boss. Once he started talking, it was clear: he was yearning to argue each issue in technical, excruciating detail, at times well beyond the scope of his attorneys’ questions. This gave us the second opportunity, and we did not let it slip away.

While the plaintiff’s passion for his position was sincere, we now had a second chance to cross examine him, again, on key factual issues that weighed in our favor, but more broadly than before based upon the expanded scope of his second direct examination. More important than any one question or answer, we were able to draw out more clearly the reality of his personality which our client had experienced and responded to. Through this, the plaintiff painted himself in a negative way in real time, right before the jury.

We then argued that the jury saw exactly what our client saw and had to deal with at the time, and that some people, for reasons which are hard to explain, just look to debate certain issues even when there is no conflict to debate. We think this helped the jury understand the decisions that our client made and why.

Lesson 2: Take advantage of unexpected opportunities that will arise at trial.

As the “director” of the trial, it is key to plan ahead and have your “acts” ready to present to the jury. But don’t be so wedded to your trial plan that you let unexpected opportunities go by. A trial is a dynamic, adversarial environment that cannot be fully scripted out for every possible scenario that will arise. Your success will often depend on identifying and quickly taking advantage of mistakes by your opponent.

The jurors were persuaded by a real-world analogy that we presented to them in our closing argument.

During our closing, I asked the jury to consider a hypothetical – if they were asked to describe a candidate for president’s position on an issue, would they, by simply answering that question, be personally endorsing that issue? Of course, merely answering the question, “the candidate’s position is – X,” would not amount to endorsing the candidate’s position. It is fundamentally different than, say, voting for or donating to that candidate. We used this analogy to argue that the plaintiff’s completion of the training would not have amounted to his agreement with the employer’s policies.

Our trial team came up with that analogy the night before closing. I had long thought about how to best relate the position that our client faced when responding to the plaintiff when he chose not to complete the training. I had struggled to find the right one to use.

Through repeatedly talking over this problem, the example came to us. It became crystal clear what we needed to do. I used this analogy in our closing argument, and I think it was critical in persuading the jury to decide in our client’s favor.

Lesson 3: Collaborate to find the right arguments and analogies to make the case relatable to the jury.

As lawyers, it is easy to think that we have – or feel pressure to have – all the answers on our own. Don’t fall into that trap. As the expression goes, two heads are better than one, and ideas will come to you while collaborating with colleagues or even your client about an issue that you may not have realized when flying solo. Through this process, almost without fail, you will find the most persuasive arguments, including real-world analogies to present to the jury that will be key in persuading them to agree with your client’s position.

Our team is passionate about trying cases, and we always work to learn from each case.  These lessons will help us continue to improve as trial lawyers and I hope, will also be helpful for you to consider.

By John B. Flood, Managing Member

Copyright © 2023 Designed with you in mind by Sparrow Websites